In a coaching conversation with my client Leanna this week, she told me that she was struggling with Patrick, one of her direct reports (of course no real names are used!!)

Leanna had given Patrick feedback that he needed to change his approach to a project…but nothing had changed!

Often, when a person is struggling to change, you likely THINK that you know why they are not following through.

But to be honest, more often than not, you typically have no idea what’s really going on.

You are likely looking at the situation only from your own perspective.

You are likely making assumptions about the situation, again, from your own perspective.

In this type of situation, I like to quote Stephen Covey who says,

“Seek first to understand before being understood.”

Since we typically form opinions based on our own experiences, this Covey quote reminds us to really seek to understand another person’s perspective and experiences. 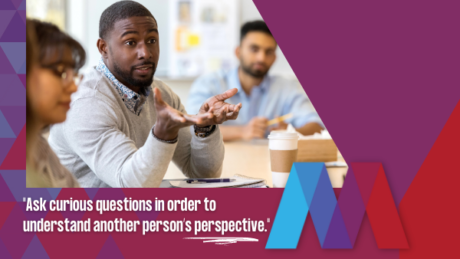 Most people only half listen.

We listen to respond.

We don’t listen to understand.

So, I told Leanna to write a list of open-ended questions that she needed to ask Patrick in order to understand his point of view.

But these questions had to be the right ones!! They had to be questions that were curious and not judgemental.

Leanna could not ask a question like “Why are you not doing this?”. This would create an antagonistic situation. Patrick would likely get defensive and maybe even shut down instead of responding openly.

Rather, we discussed a question like “What problems are you having with this task?”

This non-judgemental question allowed Leanna to “seek first to understand” what Patrick was struggling with before she could start to solve the problem.

Where are you making assumptions about your team?

What can you do to slow down and really understand another person’s perspective in any situation?

Sign up for practical leadership
strategies delivered weekly to you!

Do you think that leaders really need to be self-aware? Isn’t it enough that they just achieve great results?

It is normal for people to freak out during an organizational change! Why? Likely because the change will affect their job or how they work. Humans are programmed not to change. We crave consistency. We like to feel competent and…

Worried that you don’t have the right tools (or enough tools) to lead properly?

Let’s change that immediately.
Sign up to receive one practical tool or strategy every week.