Is it really necessary?

Shouldn’t the people on your team be intrinsically motivated?

Alternatively, is positive feedback a really important part of your role as a leader?

This is the exact debate that I had in a recent workshop that I facilitated with a group of leaders.

I was really surprised by the number of leaders in this group who are not giving positive feedback at all.

In fact, one of the participants said that positive feedback is a waste of time or a “personal tax” that he has to pay to be a leader.

I then reviewed the DiSC Profile for each of these participants. It turned out that many of the leaders who prioritize tasks over relationships were not giving much positive feedback.

The leaders who prioritize relationships at work were definitely giving positive feedback.

The result of my non-scientific analysis came down to work style.

So, let’s do a reality check.

Not everyone needs to receive positive feedback.

However, just because you DON’T need positive feedback does not excuse you from giving it to others. 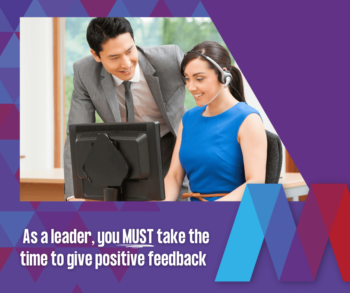 As a leader, you MUST take the time to give positive feedback, especially to the people who value recognition for their hard work.

But rest assured, it’s not something that you need to be giving gratuitously. There is a time and a place for positive feedback.

So, here are some parameters that you can follow.

It’s important to give positive feedback to:

So, are you giving positive feedback at all?

Are there some opportunities for you to give more positive feedback?

Who on your team would value receiving positive feedback…even if it isn’t something you need?

How to be a good leadership coach

Coaching is the skill that will help you develop a high-performing team. Learn about the two methods of coaching in this post!

How to properly develop your team.

In a recent training program, my client Samira started to vent. Find out what she was frustrated about & how I responded...
Copyright © 2021 Mosaic People Development. All Rights Reserved.
Back To Top
×