My client Shaun wants a promotion.

Do you know what is holding him back?

My client Lucia would love to move to another department in her organization.

What do you think is holding her back?

These two situations are common.

There is an epidemic of fear out there.

Too many people limit their potential or stay stuck in unchallenging roles because they are too afraid to speak up.

I asked Shaun if he thought of asking his manager for a promotion.

He said, “no.” He is too afraid of how his manager will react.

So, Shaun stays stuck in frustration…just dreaming of what is possible. 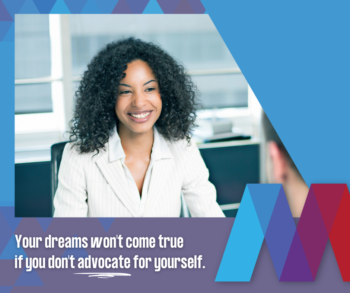 Your dreams won’t come true if you don’t advocate for yourself.

After our conversation, Shaun realized that he was actually doing a disservice to the business by not speaking up. The new role he envisions for himself would be beneficial not only for his team but also for the business.

This promotion is not a vanity project for Shaun; rather, it’s a strategic move that makes sense for the business.

So, I told Shaun he needs to do two things.

Is there a situation at work where you are too scared to speak up?

Do you have an idea that could positively impact your team, but you are holding back?

It’s your job as a leader.

But what is the consequence of not advocating for your idea or career?

Are your employees engaged in their work?

According to Gallup’s research, only 21% of employees are actively engaged in their work this year. Just think, if you have 10 people on your team, only 2 are actively engaged. The rest are coasting or disengaged! So, what does this data mean for you?

How to implement more strategically

Creating a vision is one thing. Implementing it is another. Find out how to implement strategically in this post.
Copyright © 2021 Mosaic People Development. All Rights Reserved.
Back To Top
×